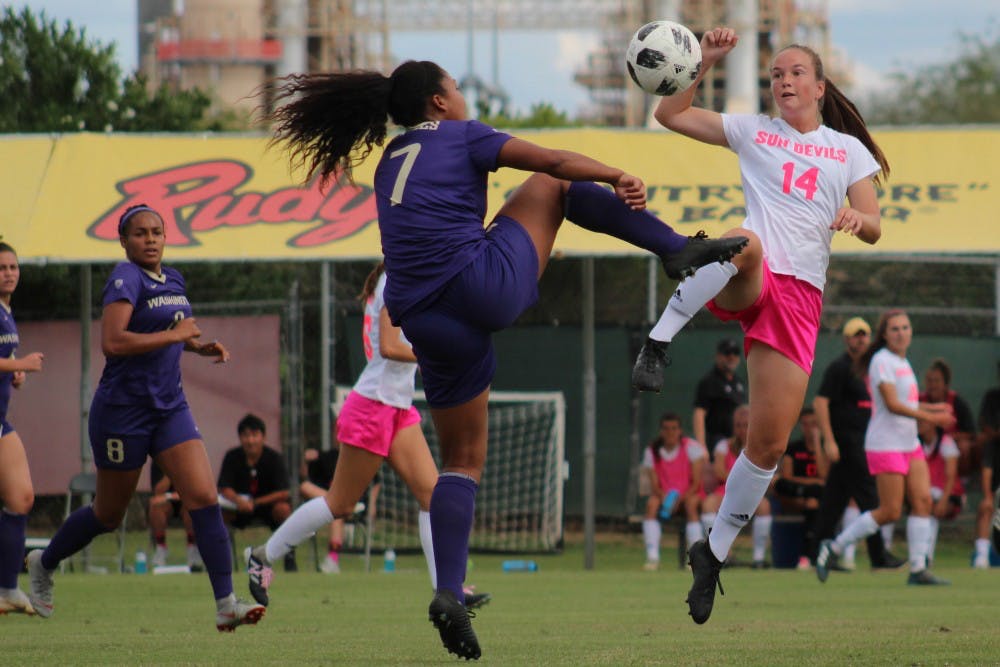 ASU freshman midfielder Eva Van Deursen (14) looks to gain control of the ball in a game against the University of Washington at Sun Devil Soccer Stadium in Tempe, Arizona, on Sunday, Oct. 21, 2018.

By Edith Noriega |
6 hours ago

Teamwork made the dream work for the ASU soccer team (8-5-1) early in the first half of Sunday’s game against the Washington Huskies (7-7-1), which ended 2-1 in favor of the Sun Devils.

During the 35th minute, a perfectly angled corner kick from senior defender Jemma Purfield met with Douglas, giving the Sun Devils a 2-0 lead.

“When we only played well for 30 minutes of the game, I’m delighted in that sense,” head coach Graham Winkworth said. “I told the girls the sign of a good team is to grind out results even when you are not performing at your best, (and) that’s exactly what happened today.”

With the help of assists from her teammates, Douglas continues to lead her team in goals with eight in her 10 starts.

“I think it’s more than I expected,” Douglas said. “I know coming out to the U.S. was going to be hard, really competitive especially in the Pac-12, but the most important thing is we get the wins and it doesn’t really matter who scores the goals.”

Although the Huskies were hungry to score in the first half, they were held to an offensive minimum having had only four shots on goal. All of the shots were saved by ASU sophomore goalkeeper Nikki Panas.

However, the Huskies quickly responded in the 47th minute when sophomore Kennedy Smith danced the ball around her opponent for the assist to freshman forward Makayla Woods who cut the deficit by half.

Desperate to even out the score, the Huskies continued to press offensively during the 67th minute when freshman forward Summer Yates’ kick was close to enter the net but instead met the feet of a Sun Devil.

With the Sun Devils earning back-to-back wins so close to the end of the season, they have not only earned three points, but sets them in a comfortable position for the November tournament.

“(It was) definitely a big positive,” senior defender Madison Wolf said on the team’s win. “We need to go into (road matches) confident but not too confident.”

ASU will hit the road for the final time this regular season against Oregon on Thursday, Oct. 21 at 1 p.m. and Oregon State on Sunday, Oct. 25 at 5 p.m.