SportsPulse: They’ve been on a collision course all year and will finally clash in Santa Clara. From Hard Rock Stadium, Trysta Krick and our college football experts preview the annual juggernaut matchup.
USA TODAY 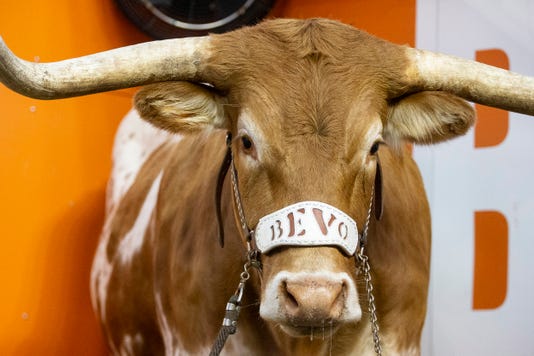 Georgia and Texas are set to face off in the Sugar Bowl on Tuesday night, but before the players began the game the school’s live animal mascots had a bit of a showdown of their own.

In a somewhat scary moment on the sidelines of the Superdome before the contest, Texas mascot Bevo — a massive longhorn steer — appeared to be angered by the presence of Uga — Georgia’s bulldog mascot. Bevo charged toward the bulldog, easily blowing through the metal barrier that separated the mascots.

Luckily, Uga (and several other human bystanders) was able to scamper away from its much heavier counterpart, and Bevo’s handlers were able to get the steer under control.

Bevo is not here for this mascot meeting. #HookEmpic.twitter.com/KXgaQzGm0W

It was a good reminder that Bevo and Uga are, in fact, live animals — despite what “Bevo” might have tweeted pregame about the mascots being friends.

“We were trying to turn him around to take a picture (with Uga) and he made a run for it,” Bevo handler Patrick Dowell told ESPN about the incident.

Bevo was actually banned from attending Texas’ game at Kansas this season due to the Lawrence school’s rule prohibiting live mascots in the stadium. It was just the second time in the past 73 years that Texas’ steer couldn’t take the field at the Thanksgiving week game.

Texas using a live steer as a mascot began in 1916.

Someone at the Sugar Bowl thought it would be a good idea to take two very different species of live animals and put them in close proximity on a football field without knowing how they would react. That wasn’t smart.

Over in the Rose Bowl, things were considerably chiller on the live mascot front.

Washington Huskies mascot Dubs was just hanging out on a nice Pasadena afternoon, eating treats and such.

Quite the day for mascots!