UW is Reveal Suits National Team of the Week

DALLAS (FWAA) – The Washington Huskies won the Apple Cup for a sixth consecutive year and put themselves in position to win the Pac-12 championship with a 28-15 win in the snow at Washington State. For containing one of the nation’s top offenses to 237 total yards and winning the Pac-12 North Division, the Huskies (9-3) are the Reveal Suits National Team of the Week for games of the weekend of Nov. 24. 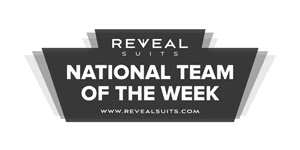 This is the fourth time for Washington to earn the honor that dates back to 2002. The announcement came on “Off Campus with Mark Packer” on ESPNU Radio on SiriusXM. Each Monday during the season, the Reveal Suits National Team of the Week will be unveiled during the program, which airs weekdays from 4-7 p.m. ET. The FWAA’s All-America Committee has selected the weekly winner and all Division I FBS and FCS schools were eligible to be selected.

Washington running back Myles Gaskin broke loose on an 80-yard touchdown run early in the fourth quarter for a crushing blow to Washington State’s conference title and College Football Playoff hopes. The long run put Gaskin over 1,000 yards for the season, and the senior became the first Pac-12 running back to top 1,000 yards rushing in all four seasons. He finished with 170 yards and three touchdowns, and enters this week’s Pac-12 Championship Game with 5,131 yards, third-most in Pac-12 history.

Besides the sixth straight Apple Cup win, it was the third straight year the Huskies kept Washington State from claiming the Pac-12 North Division title. Washington rushed for 258 yards in the snowy conditions and quarterback Jake Browning won his 38th game as a starter, the most by any quarterback in Pac-12 history.

“What a game. Much different than we had anticipated, even since this morning with the conditions. We didn’t get a chance to work in rain this year. When it turned to that snow, it changed things,: Washington coach Chris Petersen said. “Really proud of our defensive for getting turnovers and coming up big time and time again. Our offense as well. Myles Gaskin, what can you say? That guy can do it all. He’s the ultimate competitor. When you need something to happen, he’s going to get it done.”

The other National Team of the Week nominees for the weekend of Nov. 24 were:

• Minnesota (6-6): The Gophers beat Wisconsin 37-15 to snap a 14-game losing streak in the rivalry and reclaimed Paul Bunyan’s Axe on the road. Mohamed Ibrahim ran for 121 yards and a touchdown, Demetris Douglas returned a punt 69 yards for a touchdown, and Minnesota is bowl eligible for the first time under second-year head coach P.J. Fleck.

• Ohio State (11-1): The Buckeyes crushed arch-rival Michigan 62-39, breaking a host of records within the rivalry in claiming the Big Ten East Division title. Ohio State’s 62 points were the most its ever scoring against Michigan, and the most that the Wolverines have ever yielded in regulation. Quarterback Dwayne Haskins broke the Big Ten record for passing touchdowns (41) in a season and the Ohio State record for passing yards (4,003) during the rout.

• Texas A&M (8-4): The Aggies beat – or better, outlasted – LSU in the seventh overtime 74-72 to snap a seven-game losing streak to the Tigers, their first win over LSU since 1995. The game broke or tied multiple combined scoring and overtime records. Following his sixth touchdown pass to go with one on the ground, Kellen Mond tossed a two-point conversion pass to Kendrick Rogers to win it after LSU failed on its two-point conversion after its touchdown to start the seventh overtime.