Washington coach Chris Petersen won’t have to worry about snow this week, when the Huskies face the Utah Utes in the Pac-12 Championship game in Santa Clara, Calif.(Photo: Ted S. Warren, AP)

It took more than 15 minutes for Washington coach Chris Petersen to field a question about Utah during his press conference on Sunday.

Most of his time was spent re-hashing the Huskies’ victory in Friday night’s Apple Cup.

Did he enjoy the snow? No. He hates the cold.

Did the weather give an advantage to either team? Not really.

Then, right after Petersen answered a question about quarterback Jake Browning’s first-quarter interception, a reporter asked what would be different about Utah the second time around.

And just like that, the victory over the Cougars was archived.

On to the next one.

A lot has changed since then, including Utah’s quarterback. Tyler Huntley, who played in nine games and passed for 1,788 yards and 12 touchdowns, broke his collarbone in the second half of the Utes’ Nov. 3 loss to Arizona State.

Redshirt freshman Jason Shelley has been starting since then. He’s played in seven games, passing for 723 yards and three touchdowns. In Utah’s comeback victory over BYU on Saturday night, he completed 19-of-28 passes for 141 yards and a touchdown.

After falling behind 20-0 at halftime, the Utes used a 21-point fourth quarter to storm back and defeat the Cougars. Petersen, who said he watched some of the game, wasn’t surprised. He fully expected Utah to make a run. The Utes have won seven of their last eight games.

And Shelley, Petersen said, is very similar to Huntley.

Everything that Utah does starts with its defense, and the same could be said for UW. The Huskies expected the first matchup to be physical, and it was. That much shouldn’t change.

Two Utes were ejected for targeting in the first meeting. The crowd in Salt Lake City wanted similar calls on several UW hits — including a Bryon Murphy shot on Covey late in the second quarter — but they were all ruled legal.

“You better get your mind right,” Petersen said. “Our guys know it’s going to be like that. … They don’t give you anything. Lot of man coverage. Pack the box and they are extremely active and aggressive. They get off the blocks and they just have really good players across the board.

“Sometimes this time of year, with injuries and those types of things, you have new guys, but they’ve stayed healthy (on defense) so that’s out. And there’s a couple more guys. … So they’re, to me, a better team on defense than we saw the first time.”

“I know this: Our guys had tremendous respect for Utah playing them the first time,” Petersen said. “We knew that was a really good football team. And they’ll watch the tape and see this is an even better Utah team.”

Between senior day against Oregon State and the Apple Cup, the Huskies are coming off two emotional games. They’ll need that same emotion against Utah, Petersen said.

“I think it’s interesting for us because the (Washington State) game was going to be a big game and they were playing so well and we had to play our best ball,” Petersen said. “Then we go into this next game and have to play another step (up). Then depending on the bowl game, those matchups are usually pretty tough.

“It just comes back to us playing the best we can possibly play.” 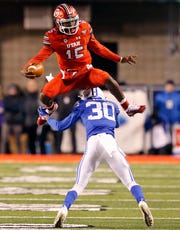